Kandil et al. (1996) noted that IgG in milk is bound to FcRn at the apical surface of the intestinal epithelium and the resulting FcRn-IgG complexes are transcytosed through the epithelium. At the basolateral surface of intestinal epithelial cells, IgG is released from FcRn into the blood or tissue fluids. FcRn is structurally similar to the major histocompatibility complex class I molecule, which presents antigenic peptides to T cells.

Like the MHC class I molecule, FcRn is composed of a heavy chain (about 48 kD) and beta-2-microglobulin (109700; about 12 kD). Its heavy chain has approximately 35% amino acid sequence identity with that of a typical MHC class I molecule. are similar in that the signal peptide, the 3 extracellular domains, the transmembrane region and the cytoplasmic region are all encoded by separate exons. 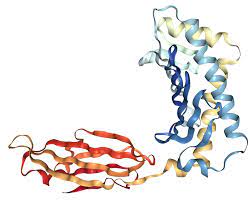 In rodents, FcRn functions efficiently during the neonatal period when it transports maternally derived IgG in ingested milk across the epithelial cell layer of the proximal small intestine. However, in humans, it carries maternal antibodies to the fetus through the placenta. In rodents, FcRn-IgG complexes are transcytosed across the intestinal epithelium and IgG is released from FcRn into blood or tissue fluids.

FcRn also protects IgG from degradation by providing a long half-life of this class of antibodies in serum. (Ref: Roopenian,, DC and Shreeram,, A (2007). Nat. Rev. Immunol