The histamine H1 receptor (H1R or HRH1) is an integral membrane protein which, in humans, is encoded by the HRH1 gene. It is recognized as a histamine receptor belonging to the family of rhodopsin-like G protein-coupled receptors and is mainly expressed in smooth muscle, on vascular endothelial cells, in the heart and in the central nervous system. This receptor is activated by the biogenic amine histamine. HRH1 is bound to an intracellular G protein (Gq) that activates the phospholipase C and inositol triphosphate (IP3) signaling pathway.

HRH1 or H1R is activated by endogenous histamine, which is a ubiquitous messenger molecule that is released by enterochromaffin-like cells, mast cells, and neurons. In vascular endothelial cells, H1R stimulation leads to the synthesis and release of several neurochemicals and neuromodulators, including platelet activating factor, prostacyclin, and nitric oxide (NO). 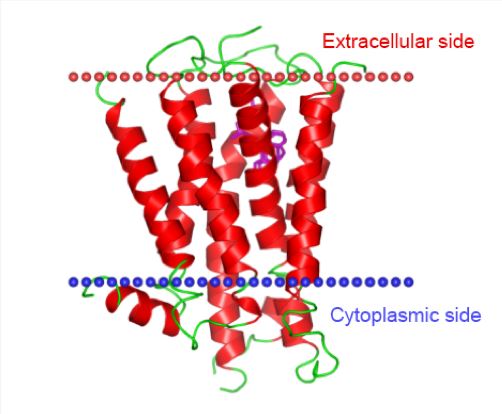 H1R-induced contraction stimulation is mediated by inositol 1,4,5-triphosphate-induced intracellular calcium mobilization. It has been reported to be associated with multiple processes, such as memory and learning, circadian rhythm, and thermoregulation. It is also known to be involved in the pathophysiology of allergic diseases such as asthma, atopic dermatitis, anaphylaxis and allergic rhinitis. Thus, H1R has been considered a useful target for the development of anti-allergy drugs.