Loss of function of the glucose-6-phosphate transporter is caused by biallelic mutations in SLC37A4 and leads to glycogen storage disease Ib. Here we describe a second disease caused by a single dominant mutation in the same gene. The mutation abolishes the transporter's ER retention signal and generates a weak Golgi retention signal. Intracellular mislocalization of the transporter leads to congenital glycosylation disorder instead of glycogen storage disease.

Glucose is an important fuel for the human body and maintaining normal blood sugar levels is of utmost importance. On an empty stomach, glucose is generated by glycogenolysis or gluconeogenesis. The final biochemical pathways of the two processes are identical. 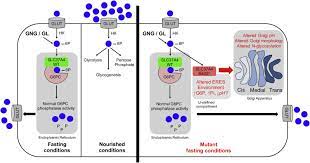 In order to retain G6PT1 in the ER, it has a C-terminal ER salvage signal (Fig. 1, general motif KKXX [4]). There are patients with homozygous destruction of the ER recovery signal. In this situation, G6PT1 is no longer retained in the organelle, it moves along the secretory pathway, its function is lost, and patients develop GSD Ib.

SLC37A4 encodes a multitransmembrane protein located in the endoplasmic reticulum (ER) necessary for the transport of glucose-6-phosphate (Glc-6P) into the ER. Once transported into the ER, Glc-6P is further hydrolyzed by tissue-specific phosphatases to glucose and inorganic phosphate during periods of glucose depletion. Pathogenic variants of SLC37A4 cause an established recessive disorder known as glycogen storage disorder 1b characterized by liver and kidney dysfunction with neutropenia.

We report seven individuals who had hepatic dysfunction, multifactorial coagulation deficiency, and cardiac problems and were heterozygous for the same variant, c.1267C>T (p.Arg423∗), in SLC37A4; those affected belonged to four unrelated families. Serum samples from affected individuals showed profound accumulation of high-mannose and hybrid-like N-glycans, while N-glycans in fibroblasts and undifferentiated iPSCs were normal. Due to the liver-specific nature of this disorder, we generated a CRISPR-based edited hepatoma cell line harboring the c.1267C>T (p.Arg423∗) variant.

These cells replicated the secreted abnormalities seen in serum N-glycosylation, and some of the mutant protein appears to shift to a distinct, non-Golgi compartment, possibly ER exit sites. These cells also show a gene dose-dependent alteration in Golgi morphology and reduced intraluminal pH that may explain the altered glycosylation. In summary, we identify a recurrent mutation in SLC37A4 that causes an inherited dominant glycosylation disorder characterized by coagulopathy and hepatic dysfunction with abnormal serum N-glycans.