Although advanced lipidomics technology facilitates the quantification of intracellular lipid components, little is known about the regulation of lipid metabolism in cancer cells.

Our data showing that lysophospholipid metabolism is required for the maintenance of CML stem cells in vivo establishes a new biologically significant mechanism of cancer recurrence that is independent of oncogene dependence.

Glycerophospholipids (phospholipids) organize the lipid bilayer in the plasma membrane of a cell. These phospholipids are also a source of lipid mediators such as prostaglandins and leukotrienes, which play critical roles in immune responses, inflammation and cancer development1,2,3. Phospholipids contain two hydrophobic fatty acid chains at the sn-1 and sn-2 sites, and a hydrophilic polar base (choline, serine, inositol, or ethanolamine) at the sn-3 site (Fig. 1a, top right). 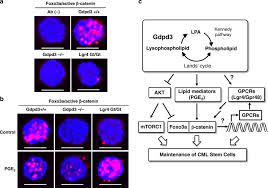 Since the 1950s, it has been known that glycerol 3-phosphate (G3P) is converted first to lysophosphatidic acids (LPA) and then to various phospholipids via the Kennedy pathway (known as the de novo pathway)4, as shown in Fig. 1a.

To provide a wide variety of lipid molecules, the fatty acid chains and polar bases of phospholipids exchange through the Lands cycle (remodeling pathway) to create distinct types of lysophospholipids5,6.

These lysophospholipids can then be recycled into LPA through the activities of three lysophospholipase D enzymes, namely autotaxin (ATX), GDPD3 (also called GDE7) and GDPD1 (GDE4), which have the ability to specifically hydrolyze the polar base at the sn -3 site of a lysophospholipid