Poly-ADP-ribose-polymerases (PARP) 1 and 2 are nuclear enzymes that catalyze poly-ADP-ribosylation of nuclear proteins transferring poly-ADP-ribose (PAR) polymers to specific residues. PARPs and PARs are involved in a variety of functions, including DNA repair in the nucleus and assembly of stress granules in the cytoplasm.

Stress granules contribute to the regulation of translation by clustering and stabilizing mRNAs as well as several cytosolic PARPs and signaling proteins to modulate cell metabolism and survival. Our study focuses on one such PARP, PARP12, a Golgi-localized mono-ADP-ribosyltransferase that, under stress challenge, reversibly translocates from the Golgi complex to the stress granules. Activation of PARP1 and release of nuclear PAR drives this translocation by direct binding of PAR to the PARP12-WWE domain.

Thus, PAR formation functionally links the activity of nuclear and cytosolic PARPs during the stress response, determining release of PARP12 from the Golgi complex and disassembly of Golgi membranes, followed by blockade of anterograde-membrane trafficking.

In particular, these functions can be rescued by reversing the stress condition (by eliminating the drug). Altogether, these data indicate a new reversible nuclear signaling that senses stress and then acts on cytosolic PARP12, which in turn converts the stress response into a reversible blockade of intracellular-membrane trafficking.

ADP-ribosylation (ADPR) is a post-translational modification of proteins implicated in an increasing range of cellular functions and in the action of several toxins relevant to human pathology1,2,3; it consists of the enzymatic transfer either of a single ADP-ribose fragment (catalyzed by mono-ADP-ribosyltransferases), or of several ADP-ribose units forming long and/or branched ADP-ribose polymers (catalyzed by poly- ADP-ribose-polymerases, PARP) of NAD+ at specific residues on target proteins4,5.

Modification of small molecules has also been reported, as in the case of the briefeldin A toxin, which can be enzymatically linked to ADP-ribose, to then bind and inhibit a specific protein substrate (CtBP1-S/BARS ref.6). Over the past decade, new molecular tools for the study of ADPR have become available7,8,9,10,11, and mammalian ADP-ribosyltransferases have been systematically identified both at the genome level and proteins12.

The human genome contains 22 genes that encode proteins with ADP-ribosyltransferase (ART) activity. ARTs are either ectoenzymes (ecto-ART) or intracellular enzymes. 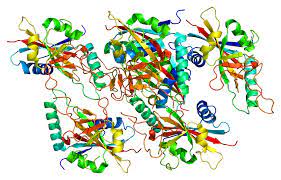 Based on the structural features of their catalytic domains, these two families have been subdivided into cholera toxin-like ART (ARTC) and diphtheria toxin-like ART (ARTD), the latter also known as PARP13. The challenge now is to explore the regulation and substrates and, in general, the role in the physiology and cell pathology of each ART14,15,16,17.

We focus here on PARP12, a mono-ART of the PARP family, so far mainly studied as an interferon-stimulated gene, with roles in both the regulation of cell survival/regrowth and in cell response. antiviral18,19,20,21,22. While the molecular mechanism responsible for cell survival is still unclear, the antiviral role mediated by PARP12 has been linked to translational inhibition at viral and cellular protein levels19.

A similar role in translational arrest as well as post-transcriptional gene expression regulation has also been reported following ectopic expression of PARP1222, a condition known to induce stress granule formation21.

Stress granules are cytoplasmic, non-membranous, dense-phase structures that rapidly assemble in cells exposed to various types of stress, including oxidative stress, heat or osmotic shock, and viral infection23; they persist until the damage is repaired, then dismantle within hours24,25.

Fully formed stress granules are organized around the perinuclear region, where they act as hubs for a subset of signaling molecules that modulate metabolism, growth, and survival23,26.

The polymer poly-ADP-ribose (PAR), a product of poly-ADP-ribose-polymerases (PARPs), has been shown to be required in the cytoplasm for the assembly of stress granules in response to various stimuli21. Six members of the PARP family (PARP5a, -12, -13.1, -13.2, -14, -15) and two isoforms of poly-ADP-ribose.