The broad phenotypic spectrum of PPP2R1A

Neurodevelopmental disorders (NDD) caused by protein phosphatase 2A (PP2A) dysfunction have mainly been associated with de novo variants in PPP2R5D and PPP2CA, and more rarely in PPP2R1A. Here, we sought to better understand the latter by characterizing 30 individuals with de novo and often recurrent variants in this PP2A scaffold Aα subunit.

Most cases were identified by routine clinical diagnostics. The variants were characterized biochemically for phosphatase activity and interaction with other PP2A subunits.

We describe 30 individuals with 16 different variants in PPP2R1A, 21 of which had previously unreported variants. The severity of developmental delay ranged from mild learning problems to severe intellectual disability (ID) with or without epilepsy. Common features were language delay, hypotonia, and hypermobile joints.

Macrocephaly was observed only in individuals without B55α subunit binding deficiency, and these patients had less severe ID and no seizures. Biochemically more disruptive variants with impaired B55α but increased striatin binding were associated with deep ID, epilepsy, corpus callosum hypoplasia, and sometimes microcephaly. 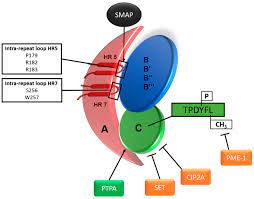 We greatly expand the phenotypic spectrum of PPP2R1A-related NDD, revealing a broader clinical presentation of patients and that the functional consequences of the variants are more diverse than previously reported.

Recent advances in exome sequencing have shown that de novo pathogenic variants are the most important cause of intellectual disability (ID) in outbred populations,1,2 and this has led to the identification of many new genetic conditions. Newly discovered causes include de novo, often recurrent pathogenic variants in protein phosphatase type 2A (PP2A) subunits, the major serine/threonine phosphatase in the human body.

1,2,3,4,5 ,6 Since PP2A counterbalances Ser/Thr-specific protein kinase activity, this phosphatase plays an essential regulatory role in cell signaling and physiology.7,8 Encoded by 19 different genes in total (2 for sub- C units, 2 for A and 15 for B subunits).8 B subunits determine substrate specificity and complex regulation,9,10,11 and are therefore the primary determinants of PP2A functions in cells and fabrics.

By far the largest number of reported PP2A mutation cases harbor de novo pathogenic variants in PPP2R5D, encoding the regulatory subunit B56δ (25 patients).4,5,12,13 All but one (p.P53S) of B56δ variants that were characterized (p.E198K, p.E200K, p.P210R and p.W207R) showed a decrease in A and C binding, suggesting a dominant-negative mode of action.

4 PPP2R5C (encoding B56γ; one case) and PPP2R5B (encoding B56β; one case) are two additional PP2A genes, whose pathogenic variants were associated with ID and proliferation.5 Although not yet biochemically characterized, the pathogenic variants affect the same highly conserved acidic loop in B56 isoforms that is recurrently mutated in isoforms affected by PPP2R5D. people.

In PPP2R5B, this loop supposedly serves as a substrate specifying the binding site.14 Seven patients (five variants) have been reported with de novo pathogenic variants in PPP2R1A, encoding the scaffold Aα subunit.4,15,16 Four of these variants (p.P179L, p.R182W, p.R183Q, and p.R258H) also occurred somatically in tumor tissue and had defective binding of specific B-type subunits, with the exception of B56δ .4,17 However, mutant Aα-B56δ complexes were found to be catalytically altered, due to increased binding of TIPRL1, an endogenous inhibitor of PP2A.17 Consistent with a dominant-negative mode of action, ectopic expression of the variant p.

R183Q Aα in wild-type (WT) PPP2R1A endometrial cancer cells increased anchorage-independent growth and tumor formation and triggered hyperphosphorylation of oncogenic PP2A substrates in GSK-3β signaling pathways , Akt and mTOR/p70 S6K. Functional characterization also revealed losses of function, consistent with decreased functionality of PP2A-B56(δ) in most cases, either through a dominant negative mechanism or haploinsufficiency.6 Finally, a nonsense variant of BOD1 (encoding a cellular inhibitor of PP2A-B56 complexes) has been reported to co-segregate with ID in an inbred family,18 and a familial reciprocal translocation (4;6)(p16.1;q22) disrupting PPP2R2